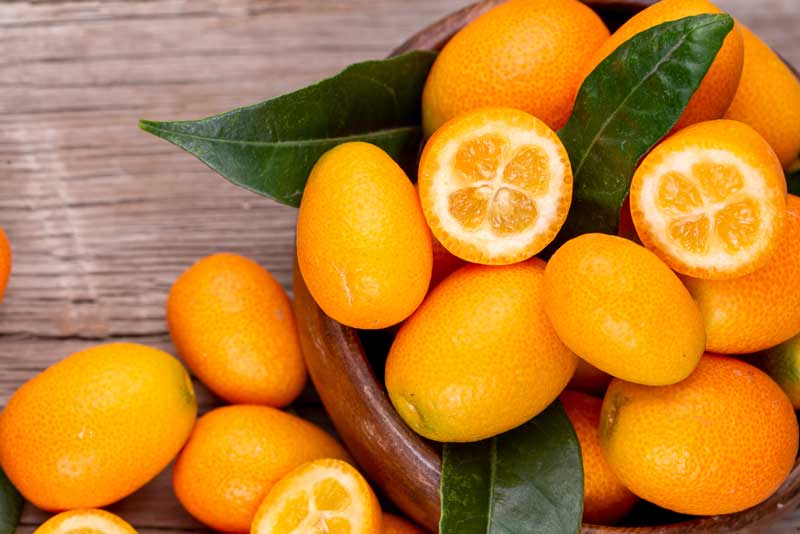 Have you ever wanted to make a Loquat Vs Kumquat comparison?

Orange, lime, lemon and other citruses are popular in this family. But have you come across kumquat and loquat? Both citrus fruits may seem alike in pronounciation but are not the same. Knowing their differences is one way to easily differentiate them.

Reading this guide will give you all information you need to know about loquat and kumquat, including their tastes, appearances and health benefits.

Loquats are fruits in the family of apples, peaches, nectarines and pears. Their skins are smooth and dark, like oranges. On the other hand, kumquats belong to the citrus family. They have sweet-tart flavors, with a tiny and oblong look not different from that of an orange.

If you want to what makes them unique and why they are not identical in many ways, you will have to read on. You will discover more about their taste, texture, appearance, sizes and benefits. You will also find if they can make an excellent substitute for each other. Dive in! 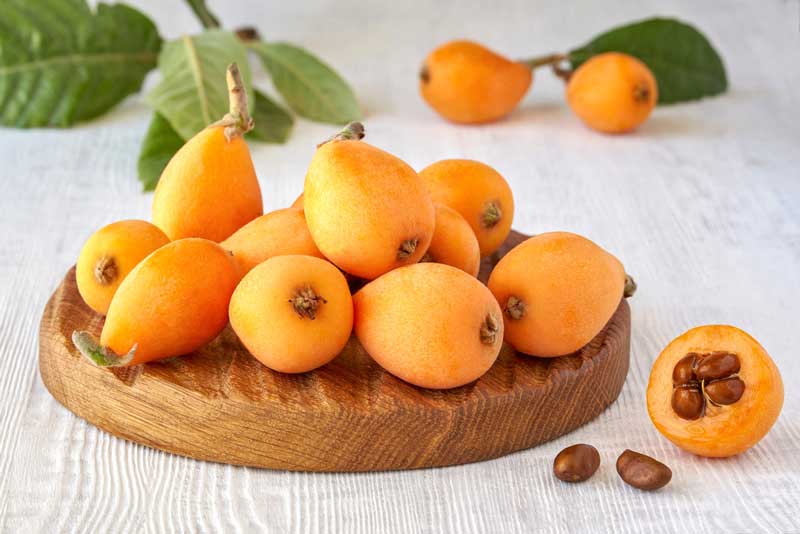 Loquats are also known as Japanese loquats and can be found throughout Asia. They have existed for several thousand years. They can be either round or pear-like and are either sweet or tangy. Loquats are members of the pear, apple and peach family, which also grow among citrus. The trees of loquats are medium-sized, with trunks that are short and twigs that are wooly. They can be as high as 20 to 30 feet. Loquats grow in clusters of four to 30.

You can find loquats in their numbers between April and June. They are best harvested and enjoyed when ripe. The trees of loquats have white blossoms with fantastic fragrances, adding beauty and brightness to their gardens.

Like kumquats, loquats are in different varieties, with the commonest being Tanaka and Algar (Argelino). Algar can be eaten with the flesh and is sweeter than Tanaka. However, Tanaka’s tarter taste makes it a great cooking ingredient.

Kumquats are Cantonese fruit known as ‘golden orange’ or ‘golden tangerine.’ They are miniature citrus fruits produced by small, shrub-like trees and can be found in temperate climates. They are commonly grown for landscaping and exist in large numbers in eastern Asia. Besides, December and January is their season.

Also, they have the color and shape of orange but are much tinier. A typical kumquat is oblong or round and can be eaten in different methods. The most popular among them are Meiwa and Nagami.

Although smaller, Nagami is an evergreen kumquat that can be easily cared for. It majorly exists in the US. The flavor is tart and delicious, while the flower is white and sweet-smelling.

In sharp contrast, Meiwa is typically sweet and round. It commonly grows in China; however, you can find it in the US, but in small numbers.

Difference Between Kumquats and Loquats

While loquats and kumquats have the same sound and similar looks, they have their dissimilarities. It includes their taste, appearance, health benefits and uses. Here, we will give a detailed explanation of their differences.

When comparing Loquat Vs Kumquat, their appearance is a key difference. The shape and color of kumquats are oval (or round) and orange. In comparison, it is a bit smaller than an olive fruit.

Meiwa kumquat is round and average-sized, with several seeds that can be somewhat bitter. But the most popular kumquat is the Nagami variety. The shape is oval, while the color is yellowish-orange. It grows as much as 1.2 inches in thickness.

You can find some ranges of loquats, each being slightly different from another. Generally, they appear in pear shapes and have soft, dark orange to yellowish skin. You can find a red-blushed or white skin variety of the fruit. In the same way, the skin can be downy but rigid and edible, with yellowish cream flesh. Each loquat has two to four seeds.

Kumquats are loaded with vital nutrients for your health. Thus, they contain many vitamins A, C, E and B-Complex. They have essential minerals such as calcium, iron, zinc, manganese and copper.

Similarly, loquats can boast of essential nutrients. However, they have rich antioxidants, which help reduce inflammation.

When comparing Loquat Vs Kumquat, their taste is a key difference. Loquats can be said to possess a sweet and sour taste, closely related to that of apricots, tangerines and mangoes. You can describe them as sweet and succulent when ripe, with floral traces. You can equally find yourself eating some varieties with pear-like tastes. Loquats are tropical fruits you can hardly resist if you are a fan.

Kumquats have the same citrusy taste as orange. But their skin is thin and sweet, unlike that of oranges, which is bitter. Surprisingly, the skin is the most precious component of the fruit. It is equally soft and somehow chewy and houses a juicy core. The juice of kumquats can range from sweet to tart, according to the ripeness level and variety you eat.

When comparing Loquat Vs Kumquat, their taste is a key difference. You can snack on raw kumquats to derive the best of it. They also serve as a fruity dessert and good holiday spread decoration. You can slice and candy them as part of a tasty dessert. If you like, you can puree and juice them as you prepare your oranges.

Since they are sweet, you may not need to peel their skin before using your kumquats. But it is necessary to strain out the seeds before you use them. Kumquats can also be good for cooking, and this reduces their tarts. Cooked kumquats make excellent jams, chutneys and marmalades, which you can use to consume your roasted or grilled meat and similar dishes.

For loquats, you can choose to consume them raw or slice them into bits as an additive to a fruit salad. They also serve as great jams and light syrups for your meal. In addition, you can blanch, peel, seed and freeze your loquats to be used later. You can also bake them into pies and desserts.

How do you choose the best loquats?

To derive the best taste, you should pick loquats from the tree and eat them when they are yellow. Once they change to orange, their essences may not be so good again. However, you may extend them to one or two days after picking them if you still want to enjoy their flavor. If you wish for longer preservation, you can freeze them.

How can you tell if a loquat is terrible?

Loquats give off their appearance, smell and texture when they go wrong and are unsuitable for use. Firstly, their skin feels waxy or slimy. Again, their outer layer becomes brownish, with a musty smell. When you touch bad loquats, you can feel moisture inside it. Also, the juice will start dripping while the outside will grow molds. At this point, don’t attempt to consume it because it has gone so bad.

What is a limequat?

It is a hybrid of a kumquat and key lime. The tastes combine lime’s tartness and kumquat’s sweetness. A limequat can do if you do not have lime or lemon for your recipe.

Suppose you are wondering what the tastes of loquats are like. In that case, they possess a sweet and sour taste, closely related to apricots, tangerines and mangoes. The flavor is also citrusy with a trace of tang. Once the fruits are ripe, their texture could be firm, crispy, or succulent peach-like.

Can you eat loquats raw?

You can enjoy loquats in their raw form or add them to a sweet and aromatic dish. You can equally buy them in some unique grocery stores around you.

Loquats have a satisfying taste that combines plum, cherry and apricot with some trace of flora. You can enjoy the sweetness more when they are ripe. You will love loquats if you are a fan of apricots, peaches and plums.

What is another name for loquat fruit?

Loquats also go by the name Eriobotrya japonica or Japanese medlar. It is a subtropical fruit belonging to the rose family (Rosaceae). It is planted for its evergreen flora and ripe fruits.

What happens if you eat too many loquats?

Suppose you consume the leaf extracts of loquats in excess amount. In that case, it leads to toxic myopathy, another name for weakness and pain. Too much seed consumption can lead to a life-threatening condition due to its toxicity.

Knowing the difference between loquats and kumquats, it will be great if you can use them well. The most important thing is to understand their appearances, color and taste. They both have loads of vitamins and minerals that benefit your health.